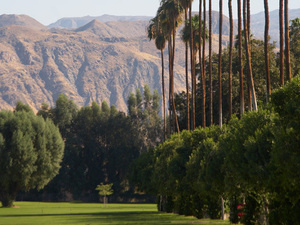 O' Donnell Golf Club was built by Thomas A. O'Donnell, an oilman who came to Palm Springs in the mid-1920s. He purchased the land upon which the O'Donnell Course is now built in two parcels, in May and December of 1925. Mr. O'Donnell also purchased 750 shares of Whitewater Mutual Water Company and helped it bring fresh water 14 miles from Whitewater Canyon to the desert before anyone knew there was water under the drifting sands of Palm Springs Village. He bought property at the corner of Stevens Road and North Palm Canyon Drive and built a reservoir through which Whitewater Mutual routed its pipeline to the area that was to become the golf course. The reservoir also acted as a desilting basin. Mr. O'Donnell was one of the five incorporators of Whitewater Mutual Water Company, which was incorporated on May 5, 1927. The other four were Preseott T. Stevens, J.J. Kocher, A.F. Hicks and Warren B. Pinney. In 1927 Mr. O'Donnell then carefully planned and, in the next few years, built at his own expense our beautiful golf course with its magnificent palm trees, oleanders and tamarisks, and its green carpet of Bermuda and rye grasses. The course never has been allowed to die during all the years since it was constructed and now forms the cushioned turf so greatly appreciated by our golfing members and guests. The greens are bent grass, which during the summer, are a challenge to maintain. The course includes nine holes with two tee positions for each hole and is SCGA rated. O'Donnell Golf Club is also very unique in that there are no "tee" times. One can just come out and play. After operating the golf course for more than fifteen years at his own expense, Tom O'Donnell in 1944 organized O'Donnell Golf Club as a private, non-profit club to which he gave a 99-year lease for the golf course, the reservoir property and the 750 shares of Whitewater Mutual stock.