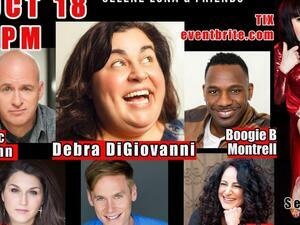 The Palm Springs International Comedy Festival & Selene Luna are bringing you the brightest comedic stars from from Film, Television and Major Comedy Clubs across the country.

Doors open at 5pm for dinner and bar service.

"Luna - a walking ball of comic defiance which is what stand up is supposed to be!" - L.A. Weekly"

Selene Luna - delivered 30 mins of IMPRESSIVE fresh takes on being a little person and being in a committed relationship with a normal size guy!" - Chicago Tribune

Selene Luna, fresh off her role as the voice of Ta Rosita in Disney-Pixars Academy Award & Golden Globe Awards Winner COCO, hosts a lineup of fresh comedic talent from Film, Television and Major Comedy Clubs across the nation at Hotel Zoso in Downtown Palm Springs.

Tonight's lineup includes headliner, Canadian comedian Debra DiGiovanni, one of a kind. Shes been called the Best Comedian to see after a Messy Break Up and for the years 2008/2009-she was named Torontos (her home town) favorite comedian. In 2008, she taped her second Comedy Now! special for CTV/Comedy network and in 2009 she taped her second gala at Montreals Just for Laughs Festival. She also taped her first special on Comedy Central with her Live at Gotham recorded in New York City. Her special, Single Awkward Female premiered on Showtime in January 2012. Debras comedy has a sharp edge while maintaining a playful, happy air and her persona is one of the best developed of any comic working today. Couple that with a hilarious act that is so personal everyone can relate and you see why Debra is so popular; her humor and charm lies in her unflinching honesty and openness.

Zach Noe Towers was recently selected to be a New Face at the prestigious Montreal Just For Laughs Festival 2018, and was one of Time Out Magazine's "2018 Comedians to Watch. Zach was the host of the "The Elite Daily Show" on Verizon's Go90 network for Seasons 1-4, and hosts and stars in the feature presentation of Out On Stage, which premiered July 24th. Zachs recent short film "Killer Friends" (which he directed, wrote, and starred in) was screened at many film festivals both domestically and internationally, and won the overall audience award at Dances With Films.

Nadya Ginsburg's career as a comedian actress and writer/producer encompasses the NYC and LA stage, network television and feature film. Having honed her skills in the alternative comedy scene in the late 90s in NYC, she's best known for her spot-on impressions of Madonna and Cher which have gained her an international cult following. She's shared the stage with Lily Tomlin, Sarah Silverman, Amy Poehler, and Amy Sedaris, and she's been featured in The New York Times, London's Q Magazine, The New Yorker, Time Out New York and In Style. She's voiced everything from Anime cartoons to national commercials and radio spots and written for comedy legends Joan Rivers and Roseanne Barr. She was a Guest Star on "2 Broke Girls," a Comedy Judge on RuPaul's Drag Race and is in the upcoming Ben Stiller Produced feature film "Friendsgiving." Nadya lives in Los Angeles and tours nationally as a comedian with her solo show Anxious and Dangerous.Michael Musto - A hilarious laugh riot!Joan Rivers - Absolute perfection.Roseanne Barr - Nadya is brilliant!The Huffington Post - Wickedly funny!The Advocate - Outrageously funny.The best Drag take on Madonna is a woman.Al Roker - Ginsburg rulesAlexis Arquette Nadya is a national treasure.

ABOUT BOOGIE B MONTRELL

Originally from New Orleans, Louisiana Comedian Boogie B Montrell currently resides in Los Angeles California and his is really stirring things up in Stand Up Comedy, TV and Film. Boogie B. has been featured on "Laughs TV" on FOX, LaffMobb's "WeGotNext" on Aspire network, "Deal With It" on TBS and hosted the Season 3 showcase of Hart Of The City New Orleans. Boogie B also just taped his new 1 hour Special "EVACUATED" and his Social Media presence is going crazy! Now in his 11th year of Stand Up comedy Expect huge things to come from Comedian Boogie B!!

Cari Kabinoff is an LA based stand-up comedian, writer, and actor. After attending UC Berkeley where she studied Theatre, Dance and Performance Studies, Cari moved to LA began her career doing improv and sketch comedy at The Groundlings. Cari was thrown into the deep end of stand-up comedy and loves it! She has performed at The SLO Comedy Festival, Ventura Harbor Comedy Festival, and Palm Springs International Comedy Festival. She performs regularly at Flappers Comedy Club, The Comedy Store, and hosts a handful of other shows monthly in LA. Caris comedy is like her laugh- infectious, in your face, and unforgettable.

Eric Hahn has been an LA based comedian writer and producer in Los Angeles for the past ten years. Eric recently recorded a set for Comedy Dynamics series and theatrically released movie Out on Stage which is currently streaming both on Amazon and Pluto TV. Eric also has produced a successful standup show for two years in Santa Barbara and manages LAs Best- a production team that produces standup shows throughout Southern California working with famous names like Ali Wong, Jon Rudnitsky and Taylor Tomlinson to name a few.