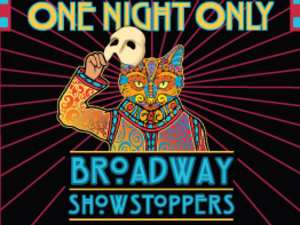 One Night Only Broadway Showstoppers

Michael Childers’ star-studded musical production of One Night Only Broadway Showstoppers will be presented on Wednesday, April 24, 2019 @ 6:30pm, at the McCallum Theatre. This year’s show benefits Barbara Sinatra Children’s Center.

Tickets will go on sale Tuesday, February 5, 2019. General admission tickets are $175, $95 and $75 and are available through the McCallum Theatre Box Office at 760-340-ARTS or online at www.mccallumtheatre.com. Limited sponsorships and VIP tickets (including premier seating and the after performance dinner with the cast hosted by Acqua California Bistro @ The River) are available through the Barbara Sinatra Children’s Center at (760) 773-1636.