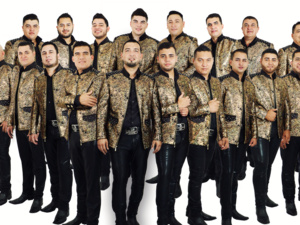 Hailing from Guamúchi, Sinaloa, La Septima Banda incorporates a variety of regional Mexican music styles — from bandas and cumbias to rancheras and narcocorridos (their specialty). The 17-piece group began performing together in 1994 under the name Banda San Luis and recorded two albums for Sony Mexico.After much consideration, the members decided to change their name to Banda la Aventurera. Over the next several years, they released four independently issued albums, three of which were written by Latin Grammy-nominated composer Espinoza Paz. In 2014, the group changed its name yet again, becoming La Septima Banda, and signed to Fonovisia.Their first recording was backing Enigma Norteño on the single “Narco de Narcos.” The band's own debut, Segurito Segurito, was released in 2015, led by the single "Bonito y Bello.” The following year, the group released A Todo Volumen, which topped the Latin charts. Micha y Micha (“half and half”) arrived in 2017 featuring the tracks "Se Defiende" and "La Bruta.”