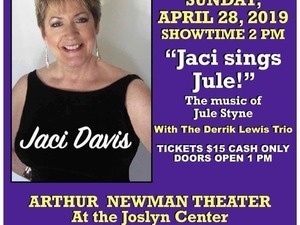 Award-winning local singer, Jaci Davis, returns for her 4th appearance at the Arthur Newman Theater at the Joslyn Center in Palm Desert on Sunday, April 28, 2019 at 2 PM in “Jaci Sings Jule”. The show is a salute to composer Jule Styne and marks the final show of the 10th season for the Cabaret On Sundays Series produced by Les Michaels. The show is presented as a live cabaret concert style backed by a live trio led by musical director Derrik Lewis on piano. Tickets are $15 cash only and sold only at the door, which opens at 1 PM with open seating at 1:30 PM.

Jaci Davis is a well-known local vocalist, music director, piano and voice teacher who holds both her Bachelors and Masters Degrees in Music. She plays and sings regularly at several local churches and clubs throughout the valley. A member of the staff at David Green’s Musical Theatre University, she also serves as musical director and won Desert Theater League Awards for many of the musicals at Palm Canyon Theater, where she’s also starred in recent productions of “Gypsy” as Mamma Rose, and as Miss Mona in “Best Little Whorehouse In Texas. For “Jaci Sings Jule”, Jaci will perform songs and tell stories about composer Jule Styne. Styne is known for numerous musical scores for both the Broadway stage and Hollywood films. A few of his works include; “Funny Girl”, “Gypsy”, “Bells Are Ringing”, “Gentlemen Prefer Blondes”, “Sugar” “High Button Shoes” and many more. Her Musical Director and pianist, Derrik Lewis, produced his acclaimed “Musical Chairs” series here in the desert and plays weekly at Tropical Restaurant. He has starred in several musicals for Palm Canyon Theater including “Xanadu”, “La Cage Aux Folles” and “Gigi” and is also known for his long career as an actor in films and performer in stage productions.