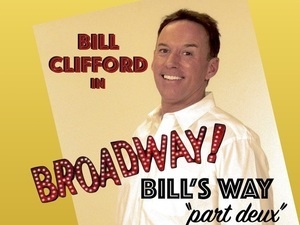 The desert’s own Bill Clifford will perform “Broadway, Bill’s Way – Part Deux” at the Arthur Newman Theatre in Palm Desert on Sunday, April 7, 2019 at 2 PM as part of the on-going Les Michaels’ Cabaret On Sundays Series. With him will be Wayne Abravanel on the baby grand piano.

Bill is a Broadway baby if there ever was one, having been doing shows for over 15 years, many with our own Palm Canyon Theatre. Some of his favorites include; A Chorus Line, Mame, Gypsy, Scarlet Pimpernel, Gigi, Anything Goes, 1776, Big River, and The Producers, and is a Desert Theatre League winner for Best Supporting Actor. This is Bill’s second show for the series; the last one was in 2015. Wayne Abravanel, who moved here from New York City, has conducted or played for musicals like; Tommy, Sunset Boulevard, Chicago, Cabaret, Jekyll and Hyde, West Side Story, and 42nd Street. In concerts, Wayne has played for Leslie Uggams, Michele Lee, Elaine Page, Jane Oliver, Roslyn Kind, and locals such as Hal Linden, Kaye Ballard, and Donna Theodore.