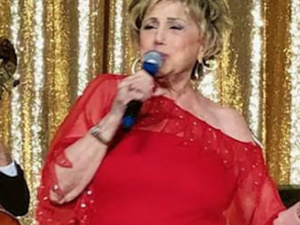 An Afternoon With Roberta Linn

– One of the desert’s favorite performers, Roberta Linn, will perform a special cabaret concert on Sunday, June 2, 2019 at the Arthur Newman Theater at the Jolsyn Center in Palm Desert. The show will feature many of her signature songs along with insider stories about her life, career, and close friendships with some of the biggest names in show business. Joining Roberta will be a trio led by Kevin Tokarz on piano, with Danny Flahive on Bass, and Gary Whiteside on drums. The show will kick off the 11th season of Les Michaels’ Cabaret On Sundays Series that will run through September 29th.  Tickets for this one show only performance will be sold at the door for $15 cash only at the Arthur Newman Theatre’s box office that opens at 1 PM and located in the Joslyn Center at 73750 Catalina Way in Palm Desert. For questions please call Les Michaels at 760-325-2731

Roberta Linn has been in show business since the age of three, appearing in a string of films along side Shirley Temple, and in the Our Gang series.  By 17 years old, Roberta Linn was entertaining television audiences weekly as Lawrence Welk's original Champagne Lady. Shortly after leaving the Welk Show, her first engagement in Las Vegas was to co-star at the New Frontier Hotel under the musical direction and arrangements by Nelson Riddle, choreographed by Charlie O'Curran and gowns designed by Edith Head. The performance received rave reviews. "Variety"-Las Vegas wrote, "Roberta Linn, the best friend a song ever had". She then went on to appear with Danny Thomas, on the main stage of the Sands Hotel in Las Vegas. A versatile singer, Roberta Linn won TV's coveted "Emmy Award", as the Outstanding Talent Of The Year when she starred coast-to-coast in her own television show, Roberta Linn's "CAFE CONTINENTAL" sponsored by the Gas Appliance Dealers of America. At the same time this was being televised, she also appeared in the syndicated TV show "FROSTY FROLICS". She has appeared in numerous feature films, countless TV guest spots, and a long list of recordings in addition to her travels performing around the world and headlining shows at top hotels and nightclubs in Las Vegas, Lake Tahoe, and Reno including five years at the Stardust and Desert Inn Hotels. Roberta, who is now resides here in the desert, will be the first of 18 Sunday shows of the Cabaret On Sundays Series that will run through September 28, 2019