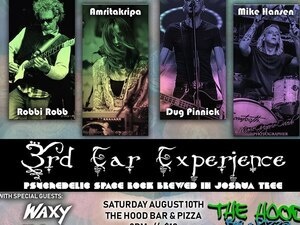 Join us for a one-of-a-kind 3rd Ear Experience live performance. Hailed as gurus of psychedelic space rock, come, let Robbi Robb, Mike Hansen, Doug Pinnick and Amritakripa take you on a sonic journey like no other: 70 minutes of constant tantric induction! (el Coyote)

Waxy & Billy Tsounis and The Amazing Androids will be opening the evening trip with their respective blends of psychedelic-infused rock.

"We want to close our eyes and let ourselves be led by its intangible notes that slide in the ether like soap bubbles at the mercy of the air currents. A wonderfully salvific sound drunkenness." – Stoner and More Blog

"At times being courageously experimental they abandoned formal arrangements to allow the music to flow in a cosmic sonic dialogue between fellow musicians and stargazers." - Tripjam Blog Spot.

"The flower children bind us with wreaths of flower power and ecstatic dance movements but we are also invited to the dark night of BLACK SABBATH and the hunt of desert rock coyotes, to be lifted up by crazy vultures shaking stones from their feathers." – Music Reviews

As guitarist & vocalist for TRIBE AFTER TRIBE, Robbi & band perfected their unique blend of African Acid Rock, opened for PEARL JAM on three consecutive tours & were hailed by Billboard Magazine as “the pioneers of World Rock”. Robbi eventually moved to California’s Mojave Desert to “shed his skin”.

Mike has lent his backbone & backbeat to many legends from hard rock artists HURRICANCE to guitar wizard STEVE VAI & even a stint with R&B Grammy winners THE POINTER SISTERS. Dug & Robbi first recruited Mike for a TRIBE AFTER TRIBE European tour in 1996. This line-up was voted by Rock Hard Magazine as “Best Live Band of the Year”.

Amritakripa known for her African/Turkish groove infused devotional music and her Eno-esque approach to ambient keyboards fills out this power trio with cosmic textures that dissolves the listeners mind and sets the controls for the heart of the sun.

Straight out of the Desert of Southern California comes WAXY, with a fierce combination of Retro-infused garage rock and a healthy dose of classic psychedelia, WAXY’s sound is Heavy sexy and sincere.

“They are highly energetic, soulful, psychedelic, with poetic lyrics that are highly relatable.” - Robin Linn (The Sun Runner Magazine )

WAXY is one of those rare and genuine breeds that are producing desert rock and roll that is completely enjoyable and uplifting….Just like Robert DeNiro says Casino, “…things get buried in the desert,” but what he forgot to mention that things also come alive just like rock and roll music from WAXY.” - Fernando Fernandez (FERNTV)